This article was originally published on http://shuffleprojects.com

This is a song by the Bill Elliott Swing Orchestra I regularly spin for Lindy Hop crowds. 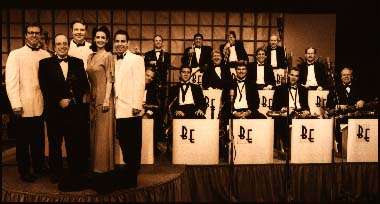 An excerpt from their website. The last update I found there is from 2006, though.

The BILL ELLIOTT SWING ORCHESTRA, fifteen musicians and four singers strong, plays exciting swing music in the styles of the '30s, '40s, and '50s, with a twist: much of the band's repertoire has been written in the '90s and 2000 by leader Bill Elliott, a composer and arranger whose songs have been prominently featured in many feature films and TV shows, including the recent HBO film Introducing Dorothy Dandridge and the current Disney Channel film Alley Cats Strike.

Elliott began his career as a rock'n'roll piano player, touring and recording with such artists as Bonnie Raitt, Stevie Nicks, and many others, before finding his calling as a swingmeister while writing and arranging songs for the 1989 film Dick Tracy.

The Swing Orchestra, formed in 1993, was an outgrowth of Elliott's continuing success in writing original, vintage-sounding swing music for film, television, and commercials. He has assembled many of L.A.'s hottest musicians for his mission of recreating the authentic fire and style of big bands at their peak in the late '30s.

The band also features BILL'S LUCKY STARS, a vocal quartet who sing in the close-harmony style of the Pied Pipers and the Modernaires, and glamorous lead singer Cassie Miller in featured solos as well.

Playing a dominant role in southern California's current swing revival, Elliott's band is a favorite among the young jitterbug and Lindy Hop dancers whose vibrant new counterculture has been growing rapidly.

Elliott's music is in the style of the great swing bands of the late '30s and early '40s – as hard-swinging as they come, with an emphasis on colorful arrangements, sophisticated and light-hearted lyrics, and danceability.

So, it seems they very active at the beginning of the 21st century, is Bill Elliott still active? Let me know!

I like this song because it has this great big band feeling with many energy changes between orchestra and solo parts. It it has a quite dirty sound, what I miss about most of the contemporary big bands.