Last week, during a Lindy Hop class I was teaching with my dance partner Marcia Bodenmann, she was playing “The Dipsy Doodle” and I thought “wow, this is a cool version, who's that from?”.

I immediately bought the song.

Born in London, Freddy Gardner was one of England's most popular saxophonists during the 1930s and '40s. He developed his technique by working in bands led by Syd Lipton, Billy Bissett, and Bert Firman.

A marvelous improviser comparable with Rudy Powell, Benny Carter, Alix Combelle, Russell Procope, Ken Mackintosh, or Willie Smith, Gardner performed regularly over the radio and from 1936 through 1939 recorded with his own small groups or his Swing Orchestra, a larger ensemble that included in its ranks trombonist and future bandleader Ted Heath.

After serving in the Second World War he was featured as a soloist with Peter Yorke & His Concert Orchestra, and most certainly would have prospered as a name artist during the LP era had not fate intervened. 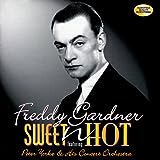