Ain't It A Shame About Mame

The title was written by James Monaco and Johnny Burke. Mary Martin performs the tune in the musical comedy film “Rhythm on the River“.

Wingy Manone recorded in the same year this version:

Joseph Matthews “Wingy” Manone (February 13, 1900 – July 9, 1982) was a New Orleans trumpet player and vocalist who lost his right arm in a streetcar accident when he was ten years old. He wore a prosthetic arm while on stage performing and used it so well that many never noticed his disability.

He started out playing on Mississippi riverboats and with the Original Crescent City Jazzers. The band later changed their name to the Arcadian Serenaders and he made his recording debut with the group in 1924.

He worked in a series of bands (occasionally as a leader) all over the country, before starting his own band Joe Manone's Harmony Kings and recording with them in 1927.

The following year Manone played in Chicago before relocating to New York. In 1929 recorded with Benny Goodman‘s Boys and then moved back to Chicago and led a band called the Cellar Boys at a club called My Cellar.

His 1930 song “Tar Paper Stomp” is the basis for the riff that would later become Glenn Miller‘s famous “In the Mood“.

In 1934 Manone moved back to New York and scored a hit record with “The Isle of Capri”and became a popular attraction. In 1940 Manone moved to Los Angeles and appeared in the Bing Crosby movie “Rhythm on the River“, and appeared regularly on Bing's radio shows.

When the Crosby show ended he played in Las Vegas and decided to move there and lived there until his death. Wingy stayed active in music and continued to lead and tour with his bands for the rest of his life. 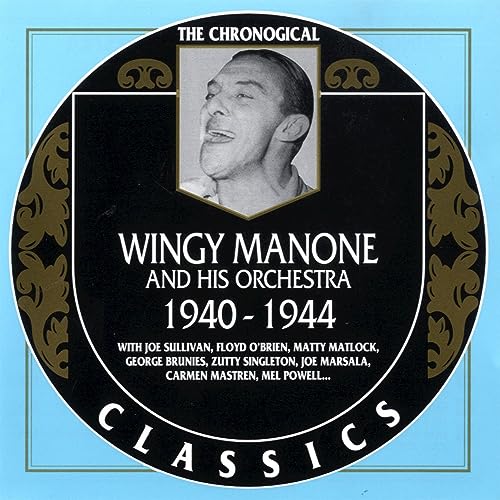 What do you think about Wingy Manone's music?