This song got a lot of recognition back in 2010 when Kevin St. Laurent & Jo Hoffberg performed a routine to that song.

Let's have a look at the clip from the Classic Lindy competition at ILHC 2010:

In fact, I don't spin many Slim (& Slam) tracks nowadays but this one is very popular and always a floor filler. Go get it.

Bulee “Slim” Gaillard (January 4, 1916 – February 26, 1991), was an American jazz singer, songwriter, guitarist, pianist, and vibraphonist, noted for his vocalese singing and word play in a language he called “Vout”. He was also known as McVouty,

One of the most eccentric vocalists ever to hit the jazz scene, Slim Gaillard became a legendary cult figure thanks to his own privately invented jive dialect “vout,” a variation on hipster slang composed of imaginary nonsense words (“oreenie” and “oroonie” being two other examples).

Gaillard's comic performances, laid-back cool, and supremely silly songs made him a popular entertainer from the late '30s to the early '50s, especially on the West Coast, and several of his compositions became genuine hits, including “Flat Foot Floogie” and “Cement Mixer.”

Versatility was not Gaillard's stock-in-trade, but he was highly effective at what he did, and his musical ability as a singer, Charlie Christian-style guitarist, and boogie-woogie pianist was perhaps a bit overlooked in comparison to the novelty value of his music.

Sources: Read the full biography on Wikipedia or allmusic. 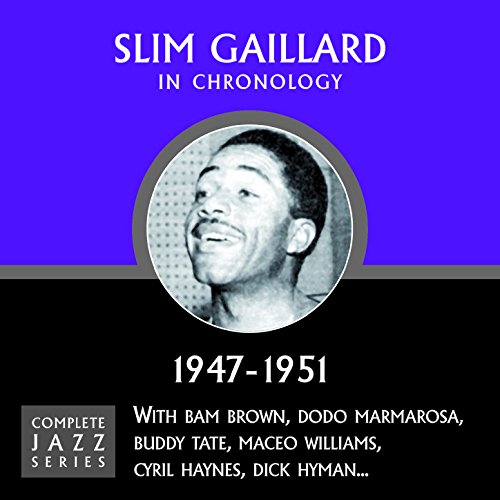