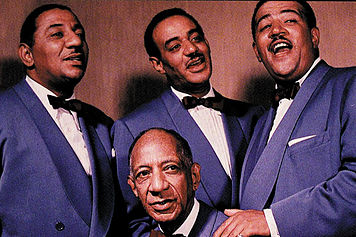 This article was originally published on http://shuffleprojects.com

I have to admit, I'm not a big fan of “a capella” style of jazz, but this here is a nice version by The Mills Brothers.

The Mills Brothers, originally billed as “Four Boys and a Guitar” were an American jazz and pop vocal quartet that had grew into one of the longest-lasting oldies acts in American popular music. They made more than 2'000 recordings that combined sold more than 50 million copies.

The four brothers were John, Jr., (born in 1910), Herbert (1912), Harry (1913), and Donald (1915). Their father owned a barber shop and founded a barbershop quartet as well, called the Four Kings of Harmony. His sons obviously learned their close harmonies first-hand, and began performing around the area.

At one show, Harry Mills forgot his kazoo – the group's usual accompaniment – and ended up trying to emulate the instrument by cupping his hand over his mouth.

The brothers were surprised to hear the sound of a trumpet proceeding from Harry's mouth, so they began to work the novelty into their act, with John taking tuba, Donald trombone, and Herbert a second trumpet.

The act was perfect for vaudeville, and the Mills Brothers also began broadcasting over a Cincinnati radio station during the late 1920s.

After moving to New York, the group became a sensation and hit it big during 1931 and early 1932 with the singles “Tiger Rag” and “Dinah”.

Dumbfounded listeners hardly believed the notice accompanying the records: “No musical instruments or mechanical devices used on this recording other than one guitar.”

Though the primitive audio of the era lent them a bit of latitude, the Mills Brothers indeed sounded exactly like they'd been backed by a small studio band.

John, Jr.'s sudden death in 1936 was a huge blow to the group, but father John, Sr. took over as bass singer and Bernard Addison became the group's guitarist.

Read the full biography at allmusic.com.

A simple and minimal but oh so swinging version.