It's time for some blues.

I played that track at the European Swing Dance Championships 2013 in the Slow Swing and Blues Couples Division (prelims, 2nd heat, 1st song).

I was quite curious how the dancers will react, when they hear that intro…

That steam locomotive kind of intro and then the transition into the blues is quite cool. During the song you find some more distinctive drumming.

Well, as you can see below, there was not that much of confusion on the dance floor ;).

Bluesman Jay McShann (January 12, 1916 – December 7, 2006) – “Hootie” to his friends – has been a living legacy of Kansas City jazz for over 60 years. As pianist, bandleader, singer, and composer McShann has been an unsung but important figure in jazz history.

McShann's big band of the 1930s and '40s delivered the hard swinging music of Kansas City imbued with foot pattin' rhythms, boogie woogie beats, and the cryin' and shoutin' blues.

It was a launching pad for many talented soloists including a young Charlie Parker, whom the band introduced to the world via early radio broadcasts, recordings, and national concert appearances.

A wide-eyed McShann first rolled into a very different Kansas City in the late 1930s, during the era of “Mob Boss” Tom Pendergast.

He then met pianist Pete Johnson and singer Joe Turner, who would have a profound effect on his career.

McShann later started his own group that in just a few years grew into a full fledged big band. In 1941, with Walter Brown on vocals, the Jay McShann Orchestra recorded its biggest selling hits, including “Confessin' the Blues,” “Hootie Blues,” and “Vine Street Boogie,” for Decca Records.

Just two short years later, with a year's worth of advanced bookings, the orchestra was disbanded in one fell swoop when McShann was drafted into the army right off the bandstand. According to McShann, “a couple of fellas came up to me and told me….we've taken an oath to bring you in tonight.”

Unable to get the orchestra back together after the war, Jay formed various groups in New York and California. It was in California, McShann remembers, where he met another young singer, Jimmy Witherspoon.

McShann drifted from the spotlight in the 1950s and '60s, but with reawakened interest in the blues in the 1970s, he staged a well-deserved comeback.

I always felt this way, that jazz never had no destiny. One guy will put the thing down and say this is the finished product. You don't do that with jazz. You ever notice that musicians, they're never satisfied. See because there was something else brought out that you hadn't picked up on before, you know.
— Jay McShann 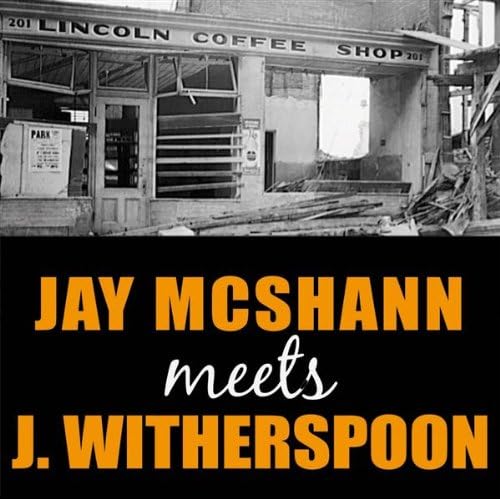