Although I like Fats Waller‘s music, I have to admit that I don't play his tracks very often. And when I think about it then there is not really a reason for it, it's just like that.

However, today I would like to feature a song by Mr. Waller.

What I've found though is a version by Alex Hill and his Hollywood Sepians. Fats Waller obviously is the composer of the song. But interestingly, Alex Hill's version was recorded in 1934, one year earlier than Waller's own version.

In 1918 he won a talent contest playing James P. Johnson‘s Carolina Shout which he learned from watching a pianola play the song. He would later take piano lessons from Johnson.

Fats began his recording career in 1922 and made a living playing rent parties, as an organist at movie theatres and as an accompanist for various vaudeville acts. In 1927 he co-wrote a couple of tunes with his old piano teacher James P. Johnson for his show “Keep Shufflin'”.

Two years later Waller wrote the score for the Broadway hit “Hot Chocolates” with lyrics supplied by his friend Andy Razaf. Fats' most famous song, “Ain't Misbehavin'” was introduced in this show which featured Louis Armstrong.

Fats Waller's big break occurred at a party given by George Gershwin in 1934, where he delighted the crowd with his piano playing and singing. An executive of Victor Records, who was at the party was so impressed that he arranged for Fats to record with the company. This arrangement would continue until Waller's death in 1943.

Most of the records he made were released under the name of Fats Waller and his Rhythm. The group consisted of around half a dozen musicians who worked with him regularly, including Zutty Singleton. Throughout the 1930s and early 1940s Fats was a star of radio and nightclubs, and toured Europe.

He unexpectedtly died on board a train near Kansas City, Missouri of pneumonia in 1943. 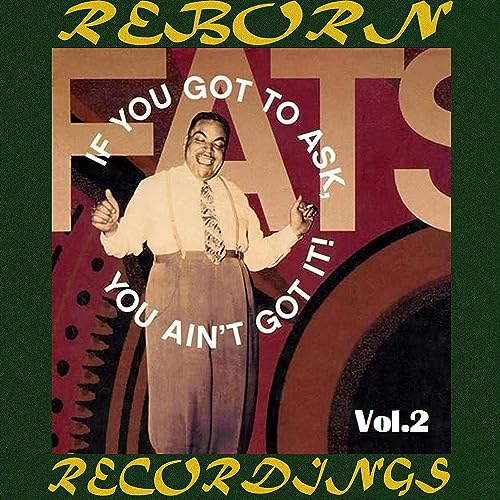